Meanwhile, back with the Maccabees…

We took several more cities, and knocked down the pagan altars. Israel was beginning to follow the Torah again. My Father walked with his head high, proud to lead the people back to righteousness. I remember one day he was planning an advance on a city with Judas, and a sudden coughing fit caught hold of him. I fetched some water for him, and it helped a little. But the next day, it happened again. He had to sit down.

We each asked, “Father, are you all right? Can we do anything to help?” His answer was always that he was fine. But something in his eyes told me he was not. He was tired, and the spring in his steps had been missing for a few weeks.

We were staying with a family not far from our hometown of Modin. Father finally had to take to bed.

“It’s only for a few days. I’ll be fine.” We gave him broth, and bread. The few days became several days, and one day he called us all in.

“Boys, I’m old. I’m tired. This fight has finally caught up with me. You are all young and strong. You will continue the fight until it’s done.”

“But, Father…” Eleazar tried to argue with him, but it was no use. We all knew the truth. Our duty now was to listen.

“You are not called to an easy task. There is still great wickedness that you must fight against. You must love the Torah with all your hearts.” A cough interrupted his words, and Simeon gave him a glass of water.

“You must be like those that came before you. Abraham, who was faithful even to the brink of sacrificing his own son.” We all nodded as we knew the story well.

“Joseph, who did right and got promoted in Egypt.”

“Phineas, who destroyed the evil in the camp and was given the Priesthood.” He looked at me and smiled. Many years later I would understand why, but at that moment I just wanted to sob.

“Joshua, who led the people in victory and took Jericho first and then the Land.” His glance swayed over to Judas then. It was as though he was seeing things we could not see. He understood what lay ahead but couldn’t explain it to us.

“Caleb..” Another cough prevented him from speaking, and another sip of water was offered.

“Caleb, who even in his old age, wanted that mountain, and fought to the end like a young man.”

“David, who with great discernment and wisdom, showed mercy and great love. He was a man after Elohim’s heart. Be like him, my sons.”

“Eliyah, wow, my precious boys, Eliyah! He took on the wicked prophets of Baal. YHVH sent down fire from heaven, and He will do the same for you. Never forget that. He will fight for you.”

“Shadrach, Meshach, and Abednego went through the fire and came out whole. You have fires ahead of you, but you must walk. Walk knowing you have done everything to obey Torah, and trust in YHVH with all your heart.”

“Don’t fear the lions. Daniel didn’t.” His voice got very weak then, and he called Simeon to him.

In a whisper he said, “Simeon will be your father now. Listen to him. He will give you wisdom.” He kissed Simeon and called Judas.

“Judas will be your captain. He can beat you all up, so you better follow him.” We all snickered at Father’s attempt to lighten the mood. Yes, it was true. Judas could take us all at once. Father’s eyes twinkled to see us laugh just a little.

He kissed our foreheads, and then he closed his eyes. We could be brave no longer. We each began to sob and then we made excuses to leave and get some air. I headed for the donkeys. They would need loaded anyway. Why not start now? I wrapped my arms around the donkey’s neck. I called him gammal, because he was my poor man’s camel. He muffled my tears and patiently waited as I wept.

Soon I heard bustling around me, and realized that the donkeys did need to be loaded because everyone was preparing for a journey. Eleazar told me that we would take Father to Modin.

Many people followed the procession as we headed into town. Their wailing could be heard for miles. We made our way to the place where Mother was buried. This would be where Father would wait until the final resurrection. Here each of us openly cried with everyone around us. We did not want to go on without Father, but we knew we must.

As we walked away, each in their own thoughts, I wondered why Father had looked at me when he talked of Phineas. His eyes told me that he knew something I was yet to find out. But Judas called out, and I let the thought sit idle where it would stay for a long time.

Be sure to download the whole story in PDF.

Check out this Chanukah lapbook from homeschool-share. 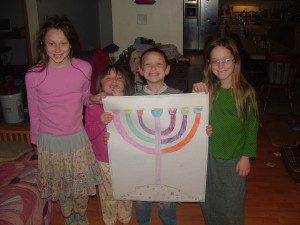