So I lost two babies in one night and cried my eyes out. The next morning, our last baby goat was acting sick. He didn’t come when called, didn’t eat, and wobbled when he walked. Before long, he wouldn’t stand at all. I discovered that he was probably infected with a virus that causes nerve damage, paralysis, and eventually death. Traditional vet medicine has no answer. But a certain website that promotes holistic care of animals recommended garlic. That made perfect sense to me. Doug helped me give large doses of garlic to every animal on the property. (The virus is most easily spread from momma to baby through the milk.) Magnum got 3 doses of garlic and spent about 4 hours sleeping on Doug’s lap, and then moved to mine. There was a point where he was very close to death, and we were constantly checking for a heartbeat. Doug leaned over him and prayed for a miracle. He basically put out a fleece. He wanted to know that Yah indeed hears our prayers and is there when we need Him.

As the day progressed, we were thankful that Magnum was still breathing. By evening, we put him down on the dog bed to get a snack for the kids. He put his head up, and then stood up! He couldn’t even lift his head before. I headed out with the girls to milk the goats, and when I got back, Doug told me that Magnum followed Isaac all the way down the hall!

We also were able to bring a brand new lamb into the house, give him a headstart and a nap, and get him back with his momma. 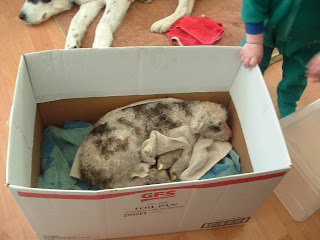 Elisha liked peeking in on the new baby.