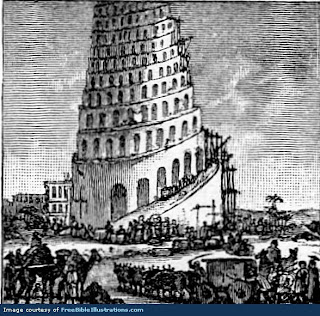 Your house is full of kids, 80% of which do not belong to you. Craziness has insued. They have bad ideas in their heads and nothing will stand in their way. What do you do?

Torah parenting means that we follow our Heavenly Father’s example. We don’t need to look any farther than the Tower of Babel.

(Gen 11:1)  Now the whole earth had one language and the same words.

(Gen 11:2)  And as people migrated from the east, they found a plain in the land of Shinar and settled there.

(Gen 11:3)  And they said to one another, “Come, let us make bricks, and burn them thoroughly.” And they had brick for stone, and bitumen for mortar.

(Gen 11:4)  Then they said, “Come, let us build ourselves a city and a tower with its top in the heavens, and let us make a name for ourselves, lest we be dispersed over the face of the whole earth.”

(Gen 11:5)  And the LORD came down to see the city and the tower, which the children of man had built.

(Gen 11:6)  And the LORD said, “Behold, they are one people, and they have all one language, and this is only the beginning of what they will do. And nothing that they propose to do will now be impossible for them.

(Gen 11:7)  Come, let us go down and there confuse their language, so that they may not understand one another’s speech.”

(Gen 11:8)  So the LORD dispersed them from there over the face of all the earth, and they left off building the city.

YHVH was dealing with many people that did not belong to Him. They were not believers and they were not obeying Him. Yet the situation had to be dealt with. As He said, nothing would stop them, and the ideas were simply going to get worse. So He used two classic tactics. Funny I should call them classic when He invented them. lol  He used divide and conquer, and distraction. The mob soon found themselves distracted by the fact that they couldn’t understand each other. They were divided when YHVH spread them over the face of the earth. And they were conquered when the tower was abandoned. Mission Accomplished!

When you find yourself dealing with children that are not your own, distract them with new activities to keep their minds and bodies happily engaged. Split them up into groups to keep them manageable. Hopefully, you will conquer their attempts to spread mayhem! Most of all, love them with true Torah love, which puts the other person’s needs first.