Vayera means And He appeared. 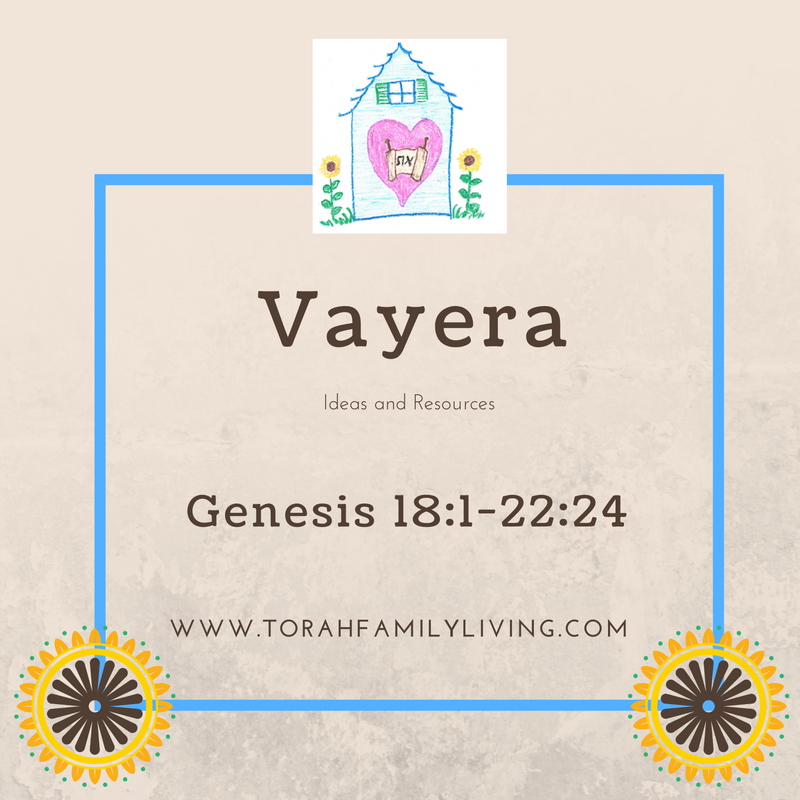 One day, Elohim and two other men came to visit Abraham.

Abraham prepared food for them.

In one year, Sarah would have a son!

Sarah laughed because she did not believe it.

Sodom and the other cities by it were very wicked, and Elohim needed to destroy them.

Abraham was very concerned about Lot.

So Abraham asked Elohim if He would save the city if there were fifty good people.

Elohim agreed that He would save the city.

Abraham asked if Elohim would save the city if there were forty good people.

Elohim agreed that He would save the city.

Abraham kept asking until he got all the way to ten people.

Elohim agreed that He would save the city, if there were ten good people.

The other two men went to the city of Sodom.

There were not even ten good people in Sodom.

So the men found Lot and told him to leave the city and not look back.

His wife turned back and turned into a statue of salt.

The men destroyed Sodom and the other cities near it.

After a year, Sarah had a baby boy!

Isaac was circumcised and grew to be a boy.

Sarah got upset with Ishmael, Isaac’s half brother.

She told Ishmael and his mother to leave.

Elohim protected Ishmael and his mother, even in the desert.

Elohim decided to give Abraham a hard test.

Elohim asked Abraham to give Isaac as an offering.

Abraham did not understand, but he still obeyed.

Abraham took Isaac, and wood, and hot coals to a special mountain.

Isaac knew that animals were always given as a gift for Elohim.

He asked his father where the animal was.

When they got to the top of the mountain, Isaac found out that he was the offering!

Isaac might have been scared, but obeyed his father.

Abraham got ready to kill his own son as a gift to Elohim.

Just in time, Elohim stopped him.

Elohim showed Abraham a ram that was caught in a bush.

Abraham gave the ram to Elohim as a gift instead.

Elohim did provide the animal for the offering!

Elohim blessed Abraham for his obedience.

Elohim promised again that all of Abraham’s children and great-grandchildren would be blessed.