Judah has protected and cherished the Torah for thousands of years. Every Shabbat they gather to hear the Torah and kiss the scroll as it passes. To teach their children the Torah, they have developed beautiful traditions such as the candle lighting on Friday nights. They have hid in basements and caves and attics during persecution, so they could maintain these beautiful Torah traditions. They have been hunted, exiled, killed and massacred because they chose to connect themselves with the God of Abraham, Isaac, and Jacob. They continued to circumcise their sons even though it resulted in their deaths. The Torah was so precious to them that the Rabbis created restrictions to guard the Torah. They created fences so that people would not even come close to breaking Torah. Though this action was done with the greatest of intentions, it added to Torah. Yet, Judah has faithfully guarded and studied the Torah for thousands of years. It is foretold that the other tribes will grab onto Judah’s tzitzits and ask to be taught the Torah.

Ephraim has been in exile for thousands of years. They have been completely absorbed in a pagan culture and do not even know who they are. Yet, YHVH has been faithful and is drawing them back to Himself. They are being shown their true identity as Israel. They are learning about the precious Torah that still applies today. They are like children that have discovered anew that the sky is blue and butterflies come from caterpillars. They run around declaring their discoveries as if they were the first to see it. They sometimes think that grownup Judah doesn’t understand, because they may not show the same excitement. They pick fights and argue just as children do, because everything is new to them. They have not had time to mature. But they have learned that the Torah is something to be treasured.

YHVH looks at all His children. He sees their faults and their strengths. He is pleased with Judah’s faithfulness, though He does not appreciate their additions to His Torah. He looks at Ephraim’s delight and smiles, but frowns at their bickering and pride. Both His sons are arrogant, but eager to please. He longs for the day when sibling rivalry will be a thing of the past.

We, as Israel, must each bring peace offerings. We must learn to respect each other. We must realize that we are different and have different gifts to bring. Judah brings steadfastness. Ephraim brings enthusiasm. Judah has maturity. Ephraim has fresh eyes.

We all love the Torah. We love YHVH, the Elohim of Abraham, Isaac, and Jacob. We must now learn to love each other. 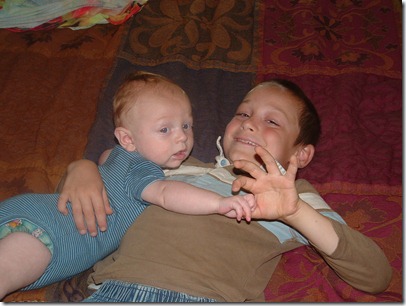