Vaera means And I appeared. 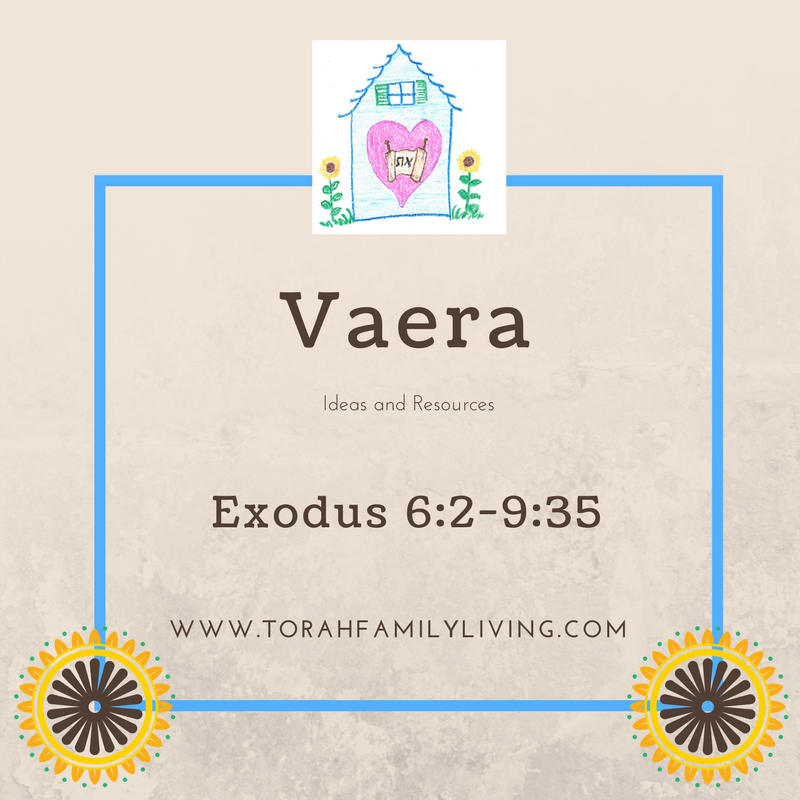 Aaron’s rod turned into a serpent!

Pharaoh’s magicians turned their rods into serpents, too.

But Aaron’s rod swallowed their rods.

YHVH began to send punishment, or plagues, on Egypt.

Moses met Pharaoh by the Nile River and brought the first plague.

Aaron hit the river with his rod and it turned to blood.

The fish died and no one could drink the water for seven days.

Pharaoh refused to let them go, so YHVH sent the second plague.

Frogs came out of the river and went into houses.

They filled beds and ovens and bowls.

Pharaoh begged for the frogs to be taken away.

So all the frogs died and the people piled them up in heaps.

But Pharaoh refused to let the Hebrews go.

Aaron stretched out his rod and the dust of the land became lice on man and animal.

The magicians could not do the same thing.

This was the third plague.

But Pharaoh still refused to free the Hebrews.

So the fourth plague was sent to Egypt.

Flies came in the houses and even covered the people!

But this time, the plague did not go to Goshen where the Hebrews lived.

After the flies were removed, a fifth plague was sent.

This time, a terrible disease came on the cattle, horses, donkeys, camels, and sheep.

But not one of the Hebrew animals died.

Pharaoh still would not let the people go.

The sixth plague was even worse.

All the Egyptians, from Pharaoh to the lowest servant, broke out with terrible sores.

But the Hebrews were fine.

YHVH wanted Pharaoh to know that He is the only true God, so He sent another plague.

But first He warned Egypt, by telling them to bring all their animals and servants inside.

Some Egyptians listened and went inside.

Some Egyptians ignored the warning.

YHVH sent hail and fire down on Egypt.

Those who listened to the warning were fine, but anyone that stayed outside was struck down.

The flax and barley plants were all destroyed.

But there was no hail in Goshen.

YHVH hardened Pharaoh’s heart, which made it harder and harder for Pharaoh to choose to follow YHVH.

We are participants in the Amazon Services LLC Associates Program, an affiliate advertising program designed to provide a means for sites to earn advertising fees by advertising and linking to amazon.com.